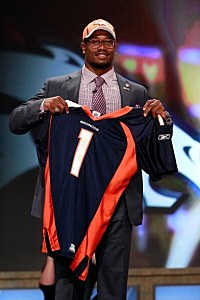 I am so ashamed. Here is my guy card, I am turning it in. Last night was the first round of the NFL draft and I completely forgot to watch it. I am sure I was somewhat effected by the contract situation with the league and didn’t feel the buzz of the draft like I have in past years but to be honest I was tainted by Todd’s non-stop talking about the royal wedding and couldn’t think of anything else. The Broncos had the 2nd pick in the draft and took Texas A&M linebacker Von Miller.

John Elway is very excited about Von, he was quoted as saying he is “a guy that when you turn on the film, you don’t even have to know what number he is. …He’s a guy that’s all over the field.” This pick should help the defense immensely. Our defense was dead last in the league last year and the addition on Miller and the return of star pass rusher Elvis Dumervil will make new head coach John Fox look like a genius. He built a very defense in Carolina when he was there and looks like he will do the same thing here. Cam Newton was the number one overall pick and went to Coach Fox’s former team, the Carolina Panthers.